When the Warrior Alpha DX hockey glove was first launched, all hockey fans admitted that Warrior had made huge improvements over the old Warrior Alpha QX gloves.

Warrior has upped the protection on the Warrior Alpha DX gloves but did end up sacrificing some of that butter-soft feel that made the Alpha QX pretty famous.

I feel they deserve credit for that, and it should be called out, so today, Puck Drawn Hockey will share with you my review for Warrior Alpha DX vs QX Hockey Glove

Problems with the Warrior Alpha QX

The Warrior Alpha DX is the new Warrior hockey glove line of four roller gloves in the Alpha series. They’ve done some upgrades which I think are worthwhile talking about. This discussion will go over the significant changes they’ve made, some improvements, and new details that aren’t very good.

From the outset, the old Warrior Alpha QX gloves were one of the most soft-broken gloves out of the box, and that felt amazing.

However, I felt the protection on them was hilariously bad, especially on the fingers where you could just stick your state could kind of fit a tick through, and it would touch directly to your finger. It’s pretty dangerous in terms of protection.

In my opinion, protection around the Warrior Alpha QX was pretty mediocre. The fingers were super soft, but it just wasn’t a protective glove. They went strictly for comfort, so when people put their hands in the glove off the shelf, it felt great, and that would kind of make people want to purchase them right away. For me, that’s a negative, so I’m going to talk about the differences here on the new Warrior Alpha DX.

I used to be a huge fan of Warrior hockey gloves. I love the Mike URL, and I thought they kind of stepped backward since then, and now we have these, so we’ll see how they hold up.

From the onset, just looking at them quickly and seeing that they look pretty much identical. You can see some different changes in materials, and you can see the different graphic packages. To be honest, they are very similar gloves.

The changes obviously besides the colorway and where they use their materials themselves, you can see there’s more fake leather material on the Warrior Alpha DX, which is pretty cool.

Overall, the new glove itself is pretty similar. They haven’t changed a design line, so it’s an evolution rather than revolution with a significant change in terms of the design.

This move is hard to explain because the old material was famous amongst Warrior hockey glove fans for a long time. However, that is a remarkable change in the new Alpha glove.

The cuff and everything all seem identical to me. However, there is a difference in the palm. Both models are pro palm plus with the same material on the fingers. The overlay is where they made the change. We now have a dotted texture at the overlay with strike the lines, which you can notice much more when it’s on your hand. This new texture has a slightly better feel on your hand, which is nice.

The next significant change altered a ton of the field of the glove, and I don’t think for the better. I’m kind of disappointed in this change; however, I think I know why they did it as well, and we’ll get to that in a second.

So, the fingers on the old Alpha were Spandex. That material is stretchy, which is great because it’s super comfortable on the fingers. It kind of conforms to your hand and moves well, which many companies want for their pro stock gloves.

I’m a huge fan of Spandex because of the comfort, but again, that protection is undoubtedly lacking weight. However, the one awesome thing about Spandex is right there.

If you have Spandex on the webbing of your fingers, the glove moves a lot with your fingers, so it’s much more comfortable. These are 15-inch gloves, and it feels pretty loose for me. Too loose to be specific. I don’t use them, but that Spandex allows me to jam my hand in there.

On this update, Warrior decided to make the Warrior Alpha DX with only Nash and Palm material. As a result, your fingers can’t extend but instead get stuck there with the Nash and don’t move.

There is no longer Spandex, so you can’t stretch your fingers as much as before. With that said, I can feel this change on the webbing and through all my fingers. Again, these are 15-inch gloves, so they are still a bit boxy for me to try to get my fingers all the way through.

In my opinion, the new Alpha gloves are pretty uncomfortable. However, the Warrior hockey glove engineers have a legit reason to do that, which is to get the protection on the fingers better.

This idea worked even though it makes the Warrior Alpha DX an uncomfortable glove. I still wish they did Spandex throughout the finger to the tips and the stretch spots. Moreover, the new material doesn’t breathe out well compared to Spandex. It’s still an improvement for the gloves in terms of protection, even though I can’t fall for it.

The next huge change is that they add more foam for finger protection. The old model is phantom, which is lightweight and received my massive criticism from the hockey world for their protection index.

With the old fingers, you can squeeze them in half, thanks to the super-soft foams. They are also very lightweight, and you would feel like there’s nothing in there, which also decreases the protection index. With the new one, you can barely squeeze the fingers due to the much more dense foams. It’s too much denser, which means a ton more of protection. 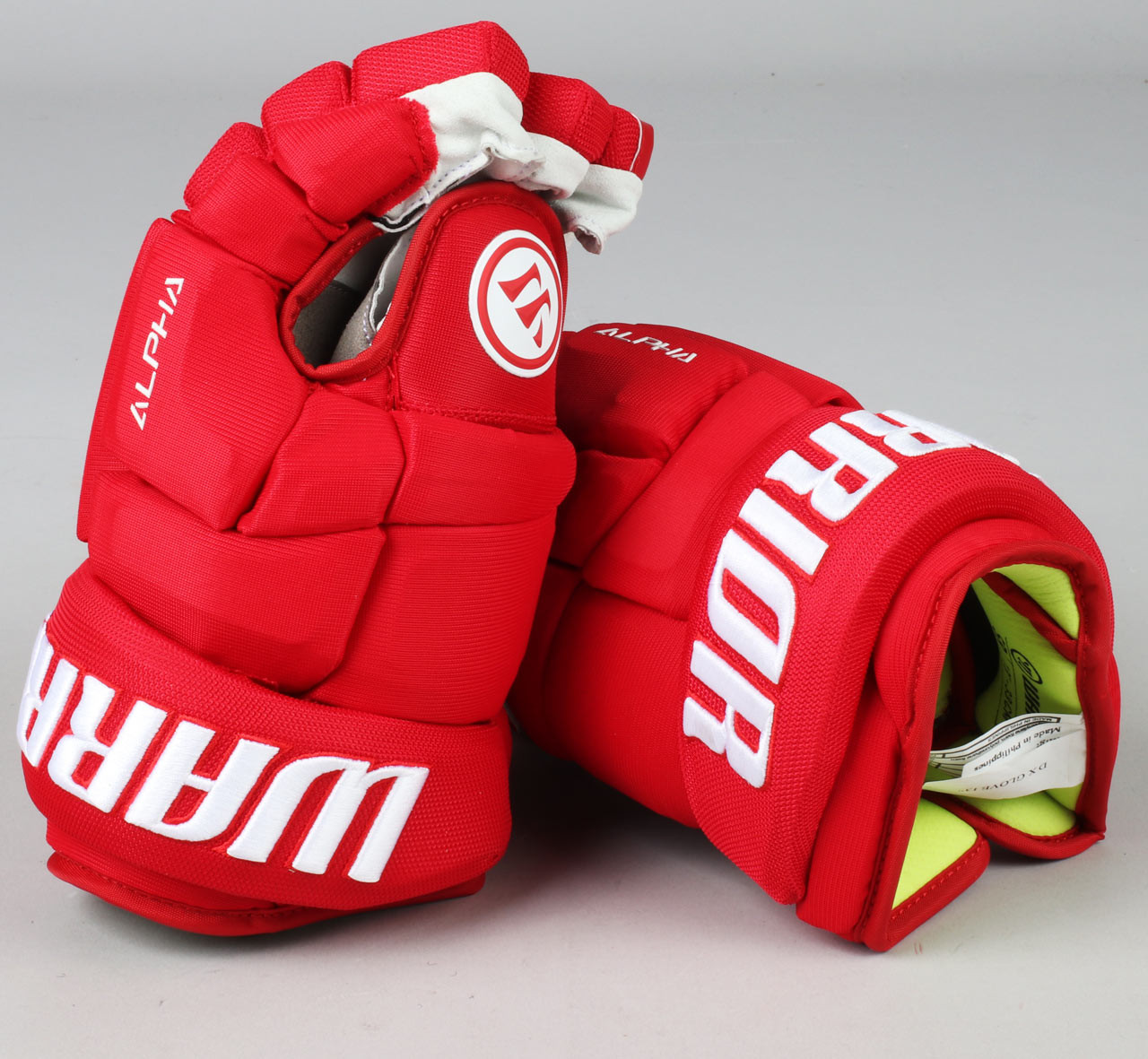 With the Alpha QX on, you could stick your hand right through the glove’s finger gap, and you could touch your actual fingers. Imagine replacing your hand with a hockey stick.

Your finger could easily get slashed there, and it would hurt a lot. I got a puck on the finger one time, and it killed me. It was the last time I wore the Alpha QX gloves.

With that said, we are looking at the new glove, which is much stiffer so that you couldn’t fully close your finger, although you can still jam them a little bit. You can’t touch your finger through the gaps anymore, and neither do the sticks. They did make a massive improvement on the Warrior Alpha DX gloves.

I saw some people online say the two models are the same, and there’s no difference there. No, they aren’t the same. From my perspective, Warrior stepped backward in terms of comfort, but they definitely took a huge step forward in protection.

That’s an enormous prop for the Warrior hockey glove team for actually listening to their customers and doing what they have to do. That’s why I am always a massive fan of their franchise gloves.

To conclude, different players will have other answers for whether the Warrior Alpha DX hockey glove is better than the QX. The QX glove offered comfort, mobility, and broke-in ability out of the box that no other glove did, while the Warrior Alpha DX no longer has that amazing butter-soft feel.

Read more: 5 things EVERY hockey player should know about sticks before buying

However, the protection is so much better than it used to be. If you want to debate which one is better, I have no answer for you. All Puck Drawn Hockey could say is that I’m impressed and happy with the changes that Warrior made to the DX.

This is not entirely visible on the outside, but when you actually dive deeper into the foams, you can genuinely feel that Warrior did a great job. Thank you for listening to the feedback, Warrior ! Visit hockey gloves to get more and more valuable tips and reviews !

BEGINER TIPS: How to play ice hockey as an adult